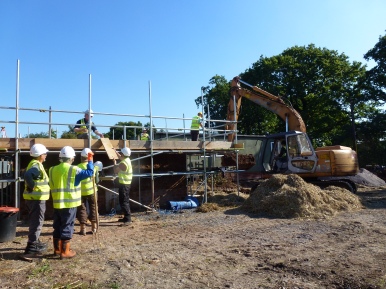 Progress is being made on the Roman dining room at the Avalon Marshes Centre as further layers of cob have been added.  Layer number 4 means that the bottom of the windows has been reached, two more lifts to go!  Time now for the cob to dry out before the roof trusses go on at the beginning of November.  The work is being supervised by the South West Heritage Trust and carried out by a team of enthusiastic volunteers.

The dining room has been constructed using building stone from the Roman villa discovered at Cannington.  Archaeological excavations took place at Cannington in 2014, ahead of the by-pass construction, part of the Hinkley C development.

Building material from Cannington Roman villa which will be used for building the replica dining room at the Avalon Marshes Centre.